Mandarin Oriental Ritz, Madrid officially opened its doors today under the creation and culinary direction of the chef and winner of three Michelin stars, Quique Dacosta. After the most ambitious and extensive renovation in its 110 years of history, it hosted an inauguration ceremony which took place this morning, with the presence of the President of the Community of Madrid, Ms. Isabel Díaz Ayuso, the city's mayor, Mr. José Luis Martínez-Almeida, and the Director General of Turespaña, Mr. Miguel Ángel Sanz Castedo. After the event's conclusion, they visited some of the culinary concepts with the chef.

"This reopening symbolizes the reopening of the industry, of travel and of flights. A return to life. We already had 11,000 5-star hotel beds, and now we can add our beloved Mandarin Oriental Ritz, Madrid, which has been, is, and will be, one of the most luxurious hotels in the entire world," the President of the Community of Madrid began her speech.

After a brief introduction, Greg Liddell, the hotel's Director General, James Riley, CEO of the Mandarin Oriental Hotel Group, and Pablo Bravo, on behalf of Olayan Group, cut the inaugural ribbon on the long-awaited hotel.

The mayor of Madrid, José Luis Martínez Almeida, trusts that openings like the Hotel Ritz shall "continue to boost Madrid's image abroad as a tourist destination of excellence, appealing to visitors drawn by the openness of Madrid's people, its cuisine, culture, and shopping tourism," and was pleased because "Madrid's inhabitants can now enjoy the cuisine of chef Quique Dacosta," he emphasized. 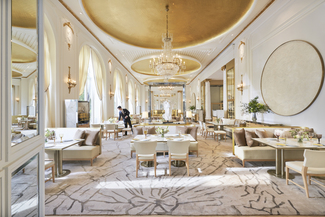 Thus, the renovated Mandarin Oriental Ritz, Madrid will become one of the most innovative culinary destinations in Spain, under Dacosta, housing a total of five culinary spaces created and managed by this winner of three Michelin stars.

"I am excited to see how Mandarin Oriental Ritz, Madrid is now open to the world after five years of work. We are truly jumping at the bit to begin this exciting journey in the wonderful, yet also exacting city of Madrid," the chef stated with elation during the iconic hotel's inaugural event.

Dacosta shared his excitement over seeing his dream materialize: "We came to Madrid with the utmost desire to make our contribution during the city's best moment in cuisine," he concluded. 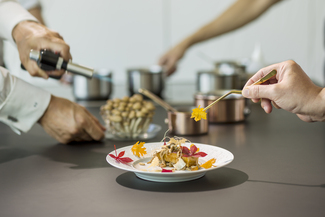 The hotel's five new culinary worlds are complemented by the renovated salons in the centenarian hotel, which once again shine in all their splendor. The Royal Salon and the Philip IV Salon, both with views over the Prado Museum, were meticulously restored to host the best events and family celebrations once again.